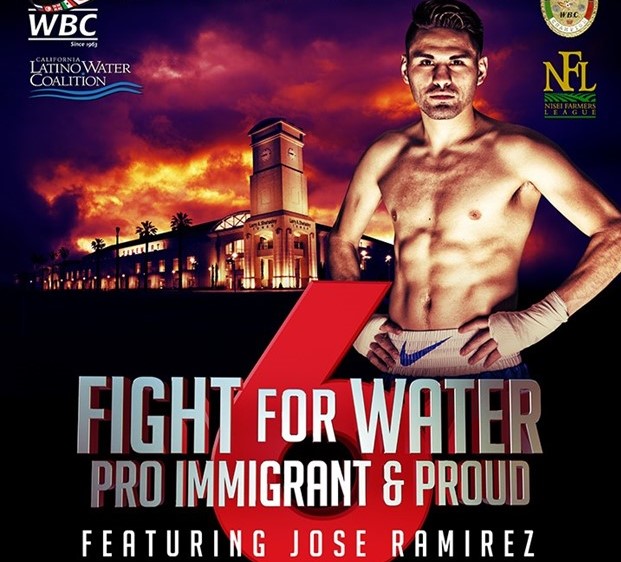 Agriculture is an integral part of Ramirez’s life. Before his rise to fame, Ramirez spent his summers picking bell peppers in the fields outside his hometown of Avenal. While he is now a world-class boxer, Ramirez remains dedicated to his roots. When he isn’t training for his next match, he utilizes his fame to advocate for water rights and immigrant farm laborers across the Central Valley.

Water rights are the focus of Ramirez’s advocacy. He is a tireless supporter of the California Latino Water Coalition, an advocacy group dedicated to improving water infrastructure, governance and conservation. Ramirez’s best-known advocacy work is his “Fight for Water” series, which has drawn thousands of people to his fights and spotlighted the importance of water access to agriculture in the Central Valley.

Ramirez was first inspired to get involved in water rights advocacy while taking a car ride through the Central Valley in 2013. That year was especially dry, signaling years of drought that have continued to pose challenges to the region’s agricultural community. It was also the same year that his father, who worked for a company that sprayed fertilizer, was nearly put out of work due to the dried-up fields. Peering out of the car window at the stretches of parched farmland before him, Ramirez understood the importance of water in the valley.

Shortly after that car ride, Ramirez heard about the California Latino Water Coalition and its fight for water storage. He immediately contacted the group and got involved. He made speeches at events, lobbied the U.S. Bureau of Reclamation, and promoted 2014’s Prop 1, a bond that authorized more than $7 billion for state water supply infrastructure projects. Ramirez eventually combined the two major aspects of his life – boxing and agriculture – into one when he decided to brand his matches with the “Fight for Water” tag.

“Mr. Ramirez has been dedicated to fighting for water and water storage in our drought ridden Central Valley,” Nisei Farmers League President Manuel Cunha said. “He has brought regional, state, and national attention to the need for more water supply reliability and the need for additional water storage.”

Besides water advocacy, Ramirez is also a champion of immigration reform, health care access and cancer research. He helped set up a fund that provides scholarships to children from immigrant families who are planning to attend Fresno State. He also named one of his bouts “Fight Against Cancer” to bring attention to the need for research and treatment.

More recently, Ramirez performed outreach during the Covid-19 pandemic to educate agricultural workers about vaccines and the importance of wearing masks. He also personally delivered items such as PPE, toiletries, and groceries to farm workers who were in need.

Whether he is in the ring or in the fields, Ramirez give his all in everything he does. Ramirez credits the strong work ethic that he forged as an agricultural worker for his successful boxing career. He says the 10-hour days working in the fields under the hot California sun made him the dedicated athlete, advocate, and family man that he is now.

“I’m going to try my best to stay on this path,” Ramirez said earlier this year.  “It’s easy to say: ‘OK, I’m for immigration or water rights,’ and just send a couple of messages on social media. But if you believe in change, you should go out and talk to your local politicians and tell them exactly what your community needs. That’s how I fight for these issues. I’m not a politician who has to play his cards right. I’m straightforward and I know what’s important to these families. I can speak the truth.”